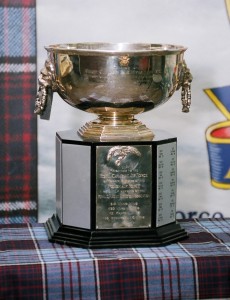 The Mynarski Trophy was presented for the first time at the 1958 Annual Convention held in Edmonton, Alberta. At the time it was introduced, the Mynarski Trophy was awarded to the Royal Canadian Air Force Wing (Station) offering up the most effective and successful social, recreational and cultural support program/facility/venue to Canadian Forces families and dependents lodging and working at the Wing/Station/Base.  The Mynarski Trophy was subsequently re-purposed circa 1976.

The Mynarski Trophy is awarded annually by the RCAF Association to the most deserving federal, provincial or civilian organization, crew or individual in recognition of a significant contribution to air search and rescue in Canada. Pilot Officer Mynarski was the mid-upper gunner of a 419 Squadron (RCAF) Lancaster aircraft, detailed to attack a target at Cambrai in France, on the night of 12th June 1944. The aircraft was attacked from below and astern by an enemy fighter and ultimately came down in flames. As an immediate result of the attack, both port engines failed. Fire broke out between the mid-upper turret and the rear turret, as well as in the p0rt wing. The flames soon became fierce and the captain ordered the crew to abandon the aircraft. Pilot Officer Mynarski left his turret and went towards the escape hatch. He then saw that the rear gunner was still in his turret and apparently unable to leave it. The turret was, in fact, immovable, since the hydraulic gear had been put out of action when the port engines failed, and the manual gear had been broken by the gunner in his attempts to escape. Without hesitation, Pilot Officer Mynarski made his way through the flames in an endeavour to reach the rear turret and release the gunner. Whilst so doing, his parachute and his clothing, up to the waist, were set on fire. All his efforts to move the turret and free the gunner were in vain. Eventually the rear gunner clearly indicated to him that there was nothing more he could do and that he should try to save his own Iife. Pilot Officer Mynarski reluctantly went back through the flames to the escape hatch. There, as a last gesture to the trapped gunner, he turned towards him, stood to attention in his flaming clothing and saluted, before he jumped out of the aircraft. Pilot Officer Mynarski’s descent was seen by French people on the ground. Both his parachute and his clothing were on fire. He was found eventually by the French, but was so severely burned that he died from his injuries. The rear gunner had a miraculous escape when the aircraft crashed. He subsequently testified that, had Pilot Officer Mynarski not attempted to save his comrade’s life, he could have left the aircraft in safety and would, doubtless, have escaped death. Pilot Officer Mynarski must have been fully aware that in trying to free the rear gunner he was almost certain to lose his own life. Despite this, with outstanding courage and complete disregard for his own safety, he went to the rescue. Willingly accepting the danger, Pilot Officer Mynarski lost his life by a most conspicuous act of heroism which called for valour of the highest order.

General
21.01 The NEC in 1976 approved the establishment of the Mynarski Trophy as an award to be presented to the most deserving unit, individual(s) or organization, in recognition of a significant contribution to air Search and Rescue (SAR) in Canada.

21.02 The Mynarski Trophy is awarded annually by the Air Force Association of Canada to the most deserving federal, provincial or civilian organization, crew or individual, “IN RECOGNITION OF OR CONTRIBUTION TO AVIATION SEARCH AND RESCUE IN CANADA”

21.03 Any citizen, group or unit/organization engaged in military or civilian air SAR is eligible to be considered for the trophy.

21.05 The criteria for nominations are:
a) effectiveness in SAR operations, considering the intensity of activity and the established resources;
b) heroic performance of a crew or an individual during a single incident;
c) a very special or outstanding contribution to SAR during the period by an individual, and,
d) outstanding performance by an organization or individual in promoting Flight Safety and SAR training in the civilian sector.

21.06 The NEC shall retain sole authority over the development and amendment of selection criteria and shall be the sole arbiter of disputes regarding their application or implementation.

21.08 In no case, may a person nominated for the trophy be permitted to be a member of the committee during the year in which he or she is nominated.

21.09 The trophy will be presented annually. The period of assessment is the preceding calendar year.

21.10 Each recipient shall be entitled to hold the trophy until recalled and shall be provided with a suitable keeper plaque at the time the trophy is presented.

21.11 Presentation of the trophy will be made at an Annual General Meeting of the Association or, a special function will be arranged.

21.12 The cost of the keeper plaque and of trophy maintenance will be borne by NHQ.